In maintaining my woodfired kiln, bricks have been replaced. These salvaged bricks, often broken in the removal process began to interest me. Each brick tells the story of its place in the kiln. The brick that held the firebox arch encrusted with dark pitted metallic like material; arch bricks covered in a grassy green fluid glaze that is molten ash that melts and remelts with each firing to light open textured insulating bricks further from the firebox that have taken on subtle colour changes where exposed to flame. The intensity of temperature and kiln atmosphere are written in the material.

The work tool became an object. I found the variety of textures, colour and the form ratios 9 x 4.5 x 3 inches* appealing.

I began to glaze these bricks to take equal place with work I usually fire in this kiln. I used existing fired lines to guide the glaze application with the intent of enhancing marks made by the fire, re-glazing and re-firing many often. Forms became related series, transforming into geological cross sections, snowy and shadowy mountain tops in my imagination.

My ceramic journey has moved from the Australian Japanese/European aesthetic student years, colourful tableware of the 80s and 90’s including a period of obsessive decal detail, then a period of simple porcelain vessels decorated in elemental oxide motifs. Since 2002 I have worked with Rajastani potters, in 2012 these connections lead to a three month Asialink residency. This was pivotal to my current practice. Under tutoring from village potters a new way of making lead to a loosening aesthetic of thrown forms and was also the catalyst for building my wood firing kiln, the newest element in my work. 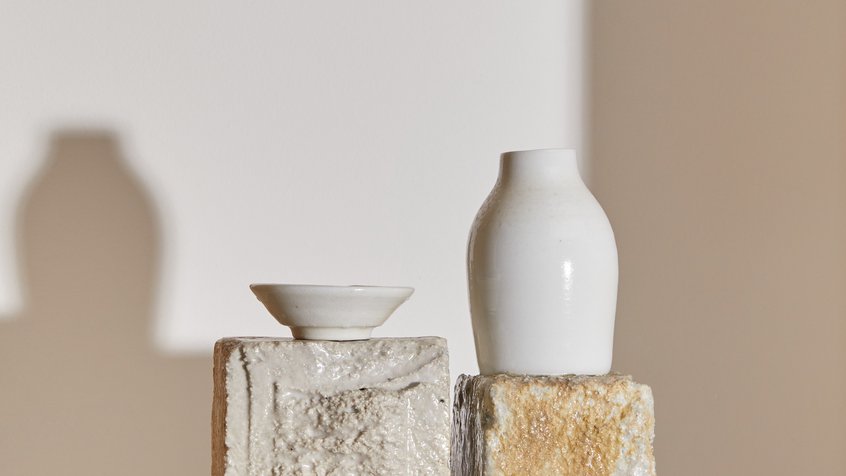 read the interview
View the catalogue